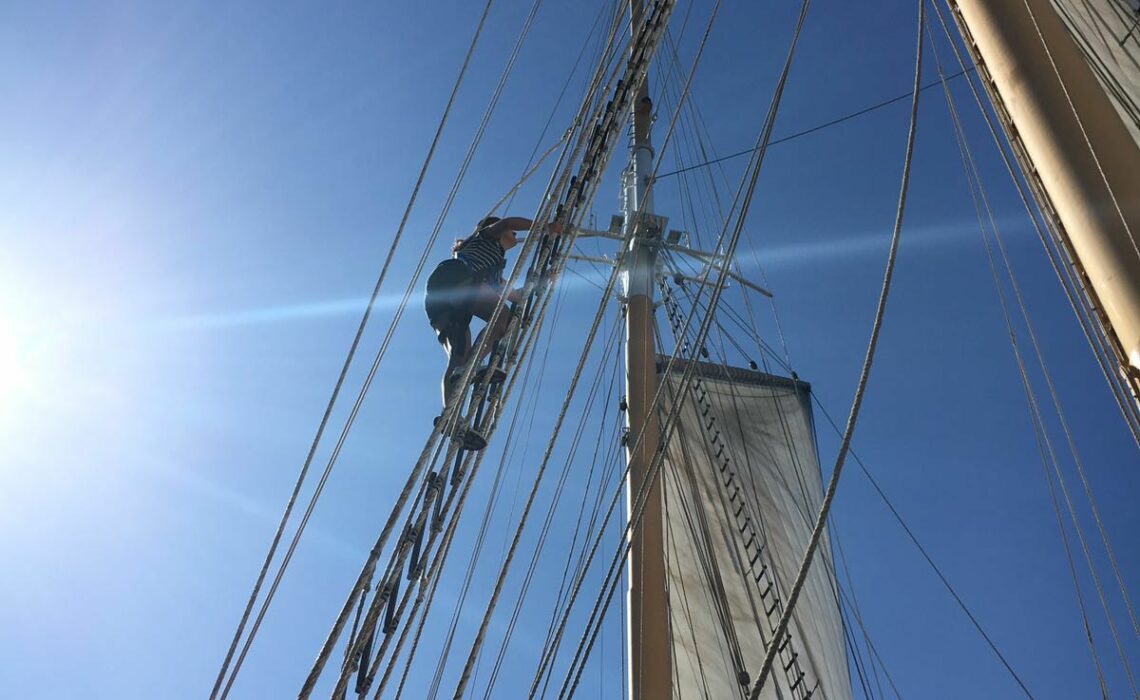 The Tall Ships Races is an international regatta that brings together several sail ships/tall ships of all categories (they are classified according to their size and some other aspects).

The race had its first edition in 1956, born from an idea formulated in 1954, by Portuguese ambassador in London Dr. Pedro Theotónio Pereira and lawyer from London, Bernard Morgan, with the objective of preserving all the big sail ships that lost popularity with the arrival of the new big modern ships.

Thanks to the race’s giant success, it kept going annually to this day.

The 2016 edition started at June 7 in Antwerp, Belgium. The first leg of the race started at the 10th, and at the 21st the ships started to arrive at Lisbon, Portugal, and were open to the public for visiting until the 24th. I went to visit them with my family and best friend that Saturday morning (the 24th).

We visited all the tall ships we could and obviously I showed them the one I’d be sailing on, the Santa Maria Manuela.

I boarded at 1000 (10 o’clock am) of the 25th and we were presented to the captain who welcomed us on board, explained us the safety procedures and explained to us all the activities we would be participating in while on board.

We left the docks at 1300 (one o’clock pm) and headed towards Cadiz, Spain.

That is one of the most beautiful images I ever recorded in my memory, seeing Lisbon from the sea, while surrounded by dozens of tall ships, it’s simply amazing.

Our first day passed in a hurry, with the emotional nautical parade in the Tejo river, settling in our accommodations and the hoisting of the flags.

We were divided in groups and a shift, which at sea we call watch.

A watch lasts for four hours, with an eight hour break between each watch.

My watch was from 4 to 8, both in the morning and in the afternoon.

On each watch I had different jobs every hour, and that allowed us all to experience every job there was on board, such as: working the helm, working in the bridge (the ship’s control room), stand watch, cleaning the deck, etc…

The second day was the worst of all for me, not only the weather was terrible, I was also pretty annoyed with my cell phone.

It decided all by itself to erase almost all the pictures I had taken so far and since I was out of reach of any internet or cell service, not even the “cloud” could save me this time.

I couldn’t call anyone either to vent about what happened or blow off some steam, so I had to go annoy my ship/class mates.

On a positive note I confirmed that I don’t get sea sick, that was nice.

The third day was amazing, the sun was out and warm and the sea was smooth.

I didn’t even go to my cabin the entire day, I only took a little nap on the deck under the sun, which was great because otherwise I would have missed the sea turtle and dolphins that passed us by.

In the afternoon I climbed one of the main masts of the ship.

That night we arrived at Cadiz, but we had to wait anchored until the following morning so the port pilot could help us berth at the docks.

As soon as we were allowed to leave the ship we took the chance to enjoy the most we could of the city, since the very next day we would have to leave at 1500 (three o’clock pm).

We toured the city, went to the beach, visited the clubs and at night we went to the party in honor of our arrival.

Ignoring our need for sleep, we still went to the beach in the morning, before our departure.

I loved this experience because it was my first ever trip on a sail ship.

I had the opportunity to try working in a 4 hour watch system; watch the amazing sunsets and sun rises at sea; got to know my classmates in different way; I lived without any means of communication for 3 days (which wasn’t as bad as I was expecting); and it made me want to go back to my classes with a strengthened love for my university degree.