Shipping- What to expect from economy?

Although 2020 was one of the more challenging years in the shipping industry there is some data that makes us feel hopeful.

According to UNCTAD, it’s estimated the shipping industry to have fallen 4,1% in 2020. UNCTAD also predicts that the industry will suffer hard times with the new spreading of the disease before it gets any better.

In the following graphic you can see the 4,1% decrease in the industry: 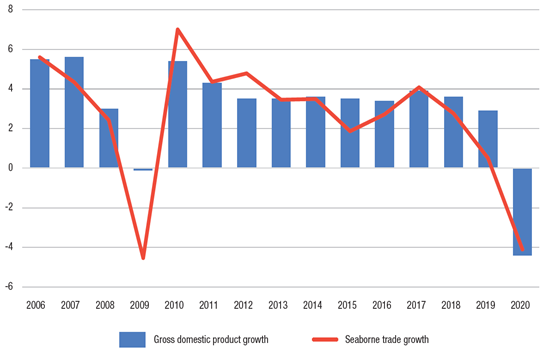 However, now the countries are prepared and know how to deal with the disease, at least in terms of the shipping world, the industry arranged a way for the ships (at least the cargo ones), to keep operating.

The global trade of containerships increased by 2,7% in the third quarter of the last year, when compared with the first quarter of 2020. And comparing both the end of the year 2020 and 2019, the trade only decreased 3%.

UNCTAD expects the shipping trade to go up again by 4,8% in 2021, taking into account that the general economy will improve and all the industries prepare them self’s properly regarding the COVID.

Of course, there are still many doubts about the final scenario, so I will share different possibilities.

Shipping- Will the pandemic be over soon?

One of the big questions is without a doubt “Will the pandemic be over? And if yes, then when?

IMF (International Monetary Fund) wrote that China was the only big economy to have an increase in the GDP (Gross Domestic Product) in 2020, but they expect the others to follow in 2021.

All this taking into account that the pandemic will be under control this year, which is not so unrealistic since most of the countries already started vaccinating their populations.

On the other hand, we have a big second wave of COVID cases in Europe which is contributing to the unemployment rates and making the governments step back in terms of decreasing the movement restrictions. There is also a decrease in the demand for energetic products due to the factories’ production slowing down.

It will take some time until we get rid of COVID.

With the amount of cargo decreasing, it was expected that the price of the freight followed the tendency, which did not happen.

The cargo managers did a good job cutting expenses, canceling ports, decreasing the amount of cargo transported by ship, consequently decreasing the market offer. They also took advantage of the decrease in fuel prices.

In 2020 the shippers increased the premium freight rates to the maximum possible, once they know the client who chooses this kind of service, are usually willing to pay more to get what they want.

There aren’t many new ships coming into the market this year, which means the market offer won’t increase and the freight rates will remain constant or even raise.

The shortening of the supply chain:

The last UNCTAD said that although COVID-19 has emphasized the interdependence of the global nations, it also increased the criticism in terms of outsourcing from distant locations.

Taking into account the last reports, there is a big possibility of the supply chain being reduced, including relocation and more independent structures with less inventory.

A bigger investment in digitalization:

The global pandemic showed us that digitalization is essential in today’s world, due to a number of factors:

o It is important to reduce the amount of paper on ports, reports, and other forms of documents.
o The digitalization of the supply chain allows tracking in real-time.

The companies that cannot follow digitalization will eventually (but very quickly) stay behind.

The comeback needs to be sustainable:

One of the most realistic goals that the companies have for this year is to recover the numbers from 2019. However, 2019 has come and gone and the climate discussion came to stay!

The regulations of maximum levels of sulfur implement by IMO entered in force in 2020. The end goal is to reduce the greenhouse effect by 50% until 2050 when compared with the 2008 levels.

The players of the industry will need to take extra measures to turn shipping into a more sustainable business.