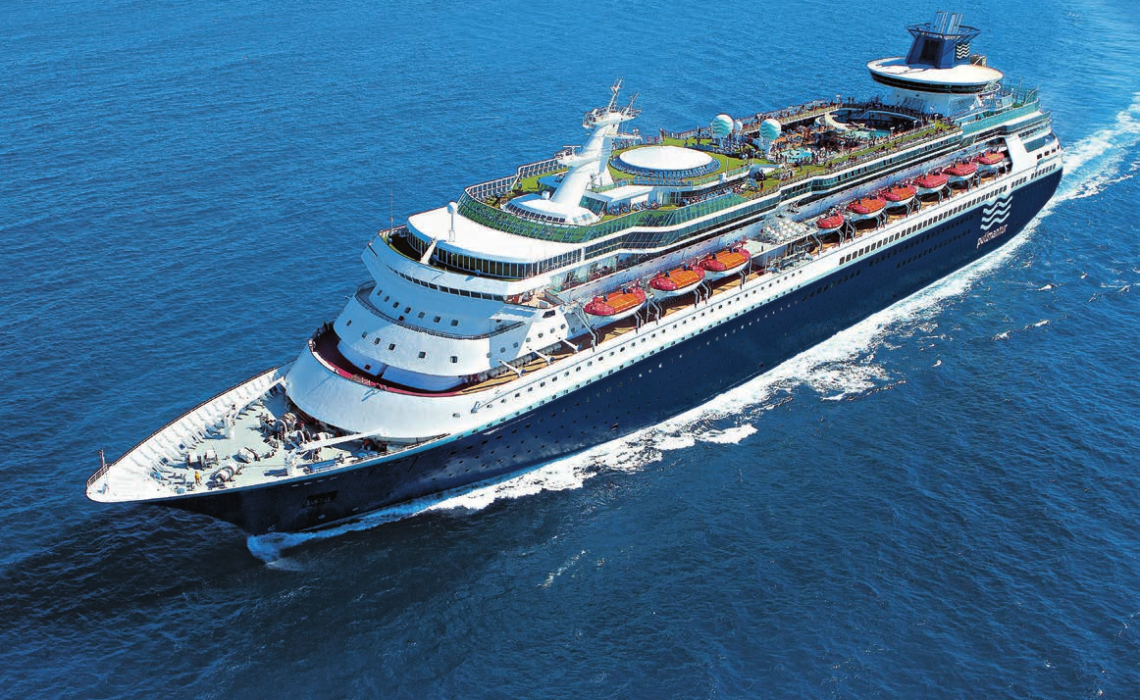 On today’s article I’m going to tell you about the progress that someone who would like to become an officer of a cruise ship can expect.

When the normal land people (caring way we use to designate people that work on land) think about ships, the first ones they think about are probably cruises.

This industry is continuously growing, and this creates a further need to hire more people to work on board these giants of the sea.

Aboard these vessels there are many careers, such as: artists, stewards, engineers, hotel managers, and many others, including the ones that “drive” the ships – deck officers.

As I’m still knew in this world, I asked for the help of a Captain that I admire to share his story.

This is Captain Amadeu Albuquerque, a former Captain of the Sovereing cruise from Pullmantur.

I asked him several questions about his career to try to understand the path to success.

How did he find the Merchant Navy?

At the beginning the captain thought about going to the war navy, since he had never heard about the merchant navy.

He started his career at Mv. Pátria , and he later went to work on her twin Mv. Império.

After April 25, 1974 the Portuguese merchant navy suffered severe changes, and was reduced to a small fleet of ships.

Due to this situation, Captain Amadeu Albuquerque decided to take a turn on his career and choose a different path, working on Fishing vessels.

Entry in the fishing world:

The captain worked on cod fishing vessels for 13 years.

Fishing carries a small basic wage, the biggest part is won by percentage of the fish that is caught.

So, to obtain better results, the officers must study fluid mechanics, meteorology, oceanography and other sciences.

Many times, fishing is practiced in the northern waters and that gives officers experience in polar waters and conditions.

The captain told me that “all this knowledge was extremely helpful later, for example on the cruises to Spitsbergen, including a famous (for me…) departure from Longyearbyen, with the port closed by ice and other really adverse weather conditions”.

Is it good to try different types of vessels?

The captain said that “fishing was quite helpful, but that doesn’t mean that I think the officers should jump from one area of activity to another to gain general knowledge”.

When people ask me, which type of vessel would I like to work in, I never know for sure what to answer, since sometimes we have this idea about something that turns out to be different from what we first imagined.

Since it’s so difficult to find a company that accepts us as deck cadets, we can’t be that picky, and have to accept the company that is willing to teach us.

When I asked the captain his opinion, he told me that “probably it would be better to try different areas until you find “the one”. The problem is, in order to make that happen, you would need to stay a month or two in each different company. The area where the seafarers work, frequently ends up being product of luck.”

How will the future be?

Since autonomous ships are a possibility in our future, the captain brought up the importance of having several competences towards human resources and loading and unloading of certain types of products.

Investing in professional courses is also important to complete our curriculum.

The turn of his career:

“On the year 2000 I was invited to start from zero, on a Spanish cruise line. With a bait like that I swallowed the hook, the line, the fishing rod and everything. The company was a success and ended up being bought by Royal Caribbean, that immediately brought more vessels from other companies of the group. And it was like this that I ended up on “Sovereign”, on “Monarch” and 4 other vessels I worked on during the last few years.”

What’s the secret for success?

“I don’t think there is such a thing as a secret recipe, unless we are thinking about “work, dedication and the will to become better”. It works for everything in life, for all occasions and it’s not anything original. One rule that should always be followed by every member of the crew is that when you leave the ship, you should try to leave it a little better than she was before you boarded.

If you ask me if there is a fundamental word, I would say “passion”…”

What were the most exciting experiences you lived onboard?

“I’m sorry to disappoint you, but I don’t have any interesting experiences to tell. I navigated several times on the Bermuda triangle and I’m here, never disappeared, I wasn’t kidnaped by aliens, never got lost or seen seven headed monsters. Sailing through the seas of this world I have never seen mermaids (I’m deeply sad about it) or giant octopuses (probably because I ate them before they grew up). The most interesting thing I saw on the sea was the famous green ray, aurora borealis and the bioluminescence of certain seaweeds. All natural things.

Of course, I was in the middle of storms, but the most dangerous experiences I passed were simpler. I mean, if there is bad weather I know exactly what I have to do to minimize the risks and keep the ship safe. But if the sewage system cramps up and I have 400 bathrooms returning the initially deposited product, the only thing I can do is to handle the pleasant comments from guests. That’s one of the biggest crises on a ship.”

Advices for the ones that are interested in following a maritime career:

“This job will certainly suffer severe changes that we can’t even imagine.”

For this reason, we need to stay as much up to date as we can, through associations, lectures, internet, etc. We should never stop studding and always try to learn more. Many companies offer courses to their employees and we must seize these opportunities.

In conclusion, the captain accentuated that “its fundamental to have passion for what we do and never stop learning”. His favorite quote is

“If you think you’re perfect, you’re a perfect idiot!”